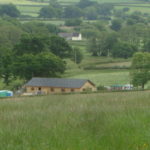 MEETING OF THE UMBORNE HALL TRUSTEES

These were agreed, and were signed off by Rob.

3. Any Matters arising from previous minutes

Paul showed the proposed extension plans, which were discussed. It was agreed that he would get these into the correct format to apply for planning permission, and then submit the plans. We would be able to discuss and change internal fittings at a later stage. Paul agreed to take this forward but he would be away until March. We would also need an access statement. It was thought that the hall would be useable for most of the building time. When we have planning permission and some preliminary costings then we will need to discuss applying for funds and grants.

The year-end figures have been audited (thanks to John Buse) and will be presented at the AGM. A spreadsheet had been circulated before the meeting, and approximate balances in our accounts – £15650, £6285, £516, and £48.

Phil has phoned and found out that we may be able to get a 5-10% discount on our insurance if we have done a full health and safety review. Phil agreed to send round information so people can see what we are currently doing/or have done. We will then discuss at the next meeting.

The future of the children’s party was briefly discussed. It will be considered later in the year. We have a reducing number of children and it would need someone to come forward prepared to make the arrangements and organise it.

We have 32 marshals for the forthcoming Grizzly. The Umborne Ug will be on a Sunday morning this year (1st July), and we would do cakes and bacon butties after the race.

A fish and chip van will be arranged for a Wednesday evening, hopefully combined with a film evening. Future plans are also for an ‘all morning’ breakfast, another ‘Come dine with me evening’, and a summer barbecue.

A few things need looking at and fixing – water leak, lights and a rotten post. The old ceiling heaters need taking out, as the meter only takes old £1 coins and it was agreed that it would be too costly to replace. Floor heaters are available and included in hall rental charges. John is arranging a maintenance book and forms to report any work or issues that need attention, and any actions can then be recorded.

Rob has spoken with Peter who has decided to stand down as a trustee. We will make him an honorary member to mark his many years of service. Melanie agreed to have another look at screens so that we can arrange the fish and chip/film evening.

10. Date of next meeting

To be arranged and confirmed