Here is my latest report covering August and Summer 2015. 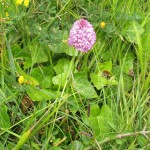 The coldest night of the month was the first one, with a minimum of 5.1C. This was the continuation of the theme of chilly nights that had brought July’s lowest temperature which had occurred in the second half of that month.  But the low reading on the 1st was unusual in that the nights are still short at this stage, and that usually, the colder nights occur towards the end of the month as the nights lengthen.

This low reading  preluded a generally cool and unsettled month. There were only six afternoons that might have been regarded as ‘warm’ compared to the average expectation. The warmest of these occured on the 8th with a high of 26.5C. This was the same unremarkable figure that had been the maximum temperature in July, but it was nearly two degrees higher than the equivalent figure for August 2014, which had occurred on two days running at the same stage in the month. In fact, the mean average temperature for August 2014 and 2015 was to all intents and purposes exactly the same, at a little over 15.8C.

Memories of 2014’s summer were ‘good’;  August being the exception, but  it was followed by a fine, dry and warm September when the average temperature was unusually  0.6C higher than in August. But I feel that this year’s pattern of a dry and sunny June with average temperatures, followed by an unsettled July with several unusually cold nights and another wet and cool August, will leave a poor lasting impression. A lack of any really extended warm weather should be noted.  The mean average temperature for ‘Summer’ was just over 15.8C, making it over 1C cooler than 2014, and the coolest since 2012. Rainfall totalled 252.0mm falling on 42 days, compared with 208.5mm and 35 rain days in 2014.  The figure pales in comparison with over double this year’s rainfall total which was recorded in 2012. One interesting observation which seems to be re-occuring is that fine, dry and warm weather in March/April seems to result in cool, wet summers.