Here is my Weather Summary for September 2014. 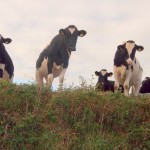 If we had felt that Summer had departed after the first few days of August, I for one, was certainly delighted to see its return in September this year.

This month was certainly the driest September I have
recorded since 1995 here, with just 26.8mm, ofwhich 25.2mm arrived on the morning of the 19th in the form of a thunderstorm. Only three other days recorded measurable rainfall. This storm marked the end of the dry spell which started on the 2nd, and followed the warmest day of the month  with a high of 26.1C and a low of 15.6C. About what might be expected from a day in the South of France! Thereafter, the weather was
not quite so reliably dry and warm, and with a tendency for rather cloudy conditions will have meant that this month would not have recorded a particularly high sunshine total, which might have been expected from such dry and warm conditions.

The average maximum temperature was 22.5C and the minimum around 10.4C, making this the warmest September I have recorded. My figures are incomplete for 2006 which was been rated nationally as being
a warmer month. The coldest night was that of 21-22nd with a reading of 4.3C. This figure was identical with that which had occurred four weeks earlier. Only two afternoons failed to reach a maximum of 20C.  Whilst
as a whole the month was considerably warmer than the past two Septembers, its highest figure was surpassed in 2011 on the 29th in that memorably fine and warm spell, which gave some localities their warmest afternoon of that year!