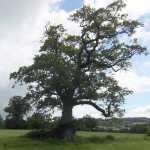 July continued the general trend for ‘better than
average’ conditions that are becoming the hall mark of 2014. My monthly average temperature was infact higher than that of July 2013 but this is due to my adjusted minimum temperature records. I have often mentioned in these reports that my minimum thermometer reads low and I am now applying a compensatory figure to this after the problem became worse in mid-May. The average maximum day temperature was 1.25C below that of 2013 at 24.6C but the nights were mild at an average of 12.7C. The
highest reading occured on the 24th at 31C. One other day, the 26th managed to exceed 30C. there were five such days in 2013. As in 2013 only one day in July 2014 failed to reach a high of 20C.

After three dry days which included the coldest night of
the month, the 2nd.with 7.1C as the low, the weather turned unsettled. The 4th was the day with the lowest maximum temperature and also the greatest daily rainfall total of 8.9mm. From the 9th, with the exception of the 17th and 18th the weather became dry overall, although two thundery showers gave small amounts of rain later on in the month. The period 4th-8th gave two thirds of the monthly total of 23.4mm. The temperature rose with a first peak of warmth occuring from the 10th-12th and a warmer day following on the 17th. The warmest spell occured from 20th-26th, and another small peak followed on the 29th-30th.

The rainfall total recorded on eight days, whilst
rivalled by July 2011 and 2006 at around 29mm, proved to be the lowest since 1999, when just 8mm fell. The combined rainfall figures for June and July at
69.3mm coincides pretty well with last year’s total of 69.8mm.