Here is the February Weather Report. 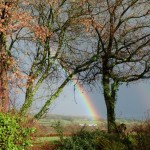 The rainfall figures for February are as remarkable as
January’s insomuch that I have now recorded the second wettest month in my entire record of nineteen years here. After January’s monumental 285.1mm, I have to report a total of 245.8mm for February.  Before this year started, the record wettest month went to September 1999 at 232.4mm. (9.15″ as it was then.) Bearing in mind that February has three days fewer than January; if I took in the first three days of March to
balance this, I could have added a further 20.5mm to the score. There was just one 0900-0900 period when no rainfall was recorded–on the 2nd. This day ‘Candlemass Day’ or ‘Groundhog Day’  was’ fair and clear’ meaning that ‘winter will come twice this year’.  It certainly did in rainfall if not in temperature!  Three days recorded falls of more than 20mm, with the heaviest fall of 28.0mm coinciding with the ‘St. Valentine’s Day’ storm.

In terms of temperature, February was a mild month, with the average day high above 11C, in common with December and January. In the midst of all the rain, there were some gratifyingly sunny moments when we could appreciate that the sun was getting higher in the sky and warming things up. I recorded a high of 14.5C on the 18th. This was the day when Exeter Airport recorded the highest U.K. reading. There were a
couple of cold nights, with a low of -3C on the 16th. My depressingly low reading minimum thermometer gave me nine nights below freezing; four of which were only just below, so probably not frosts at all!  Overall, this was the mildest February for three years.

There had been prognostications in the tabloid press that
this Winter would be the severest for one hundred years. This was rated at being for snow and cold. As it turned out it was rain and wind!  We were constantly reminded that the Jet Stream had become locked into a particular route, and that there was a downstream effect, starting in the Western Pacific with more rain than usual. This changed the patterns for the USA giving California a severe drought, and the mid and eastern states severe cold. This in turn, heightened the temperature gradient
which led to more severe low pressure systems careering across the Atlantic.  Another  effect was that from the Solstice  onwards these came in at a lower latitude than usual. If they had passed even further south, then the winter could have been severely snowy.

The total rainfall for the three Winter months fell on 75 of
the 90 days.  Of the remaining ‘dry’ days half occured during the
continuation of the quiet anticyclonic weather that started in mid November and continued until December 11th. It was during this time that we received the coldest night of the Winter at -3.9C on the 5th. This is the least cold Winter night I have recorded since Winter 2004-2005.
Overall, this Winter was the mildest for seven years, with each month recording  mean temperatures above 6C. December and February just about the same, and January a little lower. But it is  the rainfall that  has been the news item. My total for the three months was 730.8mm.  N.B. The total rainfall in the whole of 2011 was about 700mm!