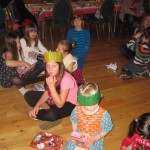 25 children gathered for the annual Umborne Children’s Xmas Party on Sat 7th Dec 2013.  A beautifully decorated hall by many helpers set the scene for the
children. Musical Chairs started off the party with almost everyone joining in. Finley was our proud winner managing to reclaim the chair which Maya had
plonked herself on. We did notice she had not quite gone round the right way to be the winner (sorry Maya!). 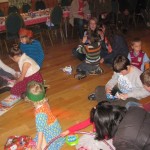 Musical Statues was up next with some
excellent movements made by Tia to the music in-between, also not forgetting our adult divas Di & Jan! We had too many good statues but the winners were
Tia & Louisa (probably more for their entertaining dancing than stillness….. but don’t tell them that!). Flapping Christmas Trees was next
on the agenda – a festive take on the Flapping Fish game. After furiously flapping their newspapers to flap their trees to the other side of the hall, Elouisa and Charles and I think Harrison were the winners. The cunning use of the newspapers by the older 2 gave them the edge – some would say it was
cheating but I didn’t really explain the rules properly! 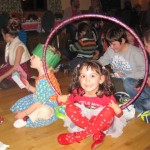 The old family favourite Pictionary brought out the competitiveness again. The pictures were amazing but not necessarily relating to the word they were supposed to be drawing! Tia had to draw a present and still appeared to be drawing it after we’d finished 2 rounds of Pictionary! We played a Spoon game next but it all went terribly wrong – fun to watch though! The finding game was fun although next time I must remember not to ask for a sock because I don’t really want another sweaty sock from Charles put in my hand again! The last game was Animal Families which I think, from hearing the animal noises, was enjoyed by all. The lavish spread of food was gobbled up in no time while Di made us all a lovely cup of tea. Then came the magical jingling of bells to let all the children know that Santa had arrived.

The sparkling grotto welcomed Santa as he strode round the excited children with his sacks full of presents and with his helper elves Ella and Maya. After finding out if the children had been good, he happily handed out all the presents. 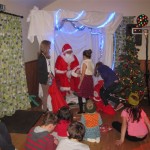 It was over all too quickly and Santa was on his way but he left many happy and excited children. Some say that Santa had lost a lot of weight, but one thing’s for sure he was still wearing the same clothes! Thank you to everyone who helped set up and clear up and to Rob for constructing the grotto and lending his music & lights system. 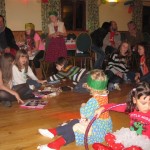 Thanks to Paddy for the music and helping with the games along with Jan, Di & Matt. Thanks to Ruhi who knows what she did and Jess F. for helping with anything thrown at her, and the older girls for helping with the food and all the parents who helped out on the night – another fantastic team effort! Also, thank you to Tescos Seaton for providing the crackers.  Merry Christmas to you all   Ann Shepherd
Category: Community, Events