12th night at the Hall

Numbers were a little low this year – possibly because so many had come to the hall 5 evenings earlier for NYEve. Those who did come out on January 5th seemed to enjoy themselves. Plenty of food on the communal centre table and lots of conversations to catch up with amongst good friends. Liz’s picture quiz was most popular – 80 questions hung up on the curtains – even categorised this year into 4 sections: famous sports people, places, celebrities and flora / fauna. The winning team of Sue, Rodney, Rick, Eleanor, Bernard, Val, Neville & Antonia won by a mile, scoring 62.5 whilst the 2nd team only scored 62!! Thanks for all your hard work Liz.

The raffle was a huge success thanks to the efforts of Tony & Antonia – raising the impressive amount of £146. It is customary at 12th night for this sum to be given to a charity of our choice rather than hall funds. This year it was decided to give it to Karenaid. Our new local friend and doctor Phil Ambler takes up the story: 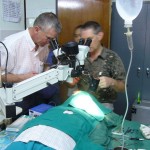 I am  very grateful that you chose Karenaid as the beneficiary of the raffle, and the support it received was fabulous in reaching £146.  I will pass this on to our Treasurer and all of it will go directly to the work on the ground on the Thai-Burmese border.  Here is a synopsis of the history and on going work which may be of interest on the Umborne News Website, together with some attached pictures: 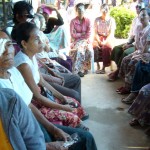 “Britain has a long history in Burma, but sadly, since its independence at the end of the 2nd World War the country has declined dreadfully under military juntas. In 1990 I was invited to join Frank Green, a Consultant Eye Surgeon from Aberdeen, in the part of eastern Burma then held by the pro-democracy movement. Before becoming a GP I had trained in eye surgery and continued to work for the Oxford Eye Hospital once a week. I had also established an eye unit in Africa.
That first trip into the jungle revealed a population cut off by war and without any access to eye care. We returned a year later, and thereafter have been twice a year for two weeks at a time doing cataract surgery and eye clinics. In 1995 that area fell to the junta, so we moved our work to the refugee camps stretched along the Thai side of the border. They are home to 150,000 people, and about 1.5 million displaced people are living at risk outside them. This latter group can get help at a volunteer clinic in the border town of Mae Sot, so we established a clinic there which is now well resourced and staffed. Frank and I are recently both retired from the NHS, and he has been spending extended periods at this clinic, with me joining him for the trips to the camps. Last year 2000 patients received surgery from Frank,  Prof. John Forrester, and a refugee medic who has been trained to do cataract surgery. My role no longer includes operating but diagnosis, biometry pre-op, assisting Frank and occasional resuscitation! 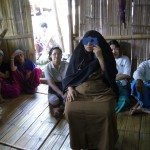 My other involvement is as Chair of Trustees of Karenaid, a very small charity run in our spare time. As well as the eye work, we support a number of projects including education, care of the elderly, children with disabilities or people with mental health issues, and two doctors delivering health care to those outside the camps.
All of this is possible thanks to the interest and generosity of countless individuals and groups. As a small charity our overheads are tiny so we can use virtually all received money on the people we seek to serve; for example, £146 buys all the materials needed to do 6  cataract operations.

If you would like to know more about Karenaid, or possibly make a donation, you can visit our website, www.karenaid.org.uk., or do please get in touch with me on pamble@aol.com, or 01297 552818. I would be very happy to speak to individuals or groups about our work. My next trip is scheduled for the end of January, and I will hope to go back there again at the end of March.”