There can not be anyone within the Parish of Shute who has not been caught up in one way or another in recognising the life and dedication Her Majesty the Queen has given to this Country, the Commonwealth and other Nations throughout the world during the past 60 years of her reign. Television and other news media have long being working to portray her life as our Head of State and of the Anglican Churches cumulating in the weekend of the 2nd to 5th June 2012. Cities, towns and villages have expressed their own particular thanks to her by way of various means of celebration.

Shute has been no exception and over the past few months the Parish Council invited residents to help form a ‘Jubilee Committee’ to decide how best this occasion should be celebrated. A small committee was formed, lead by the Parish Council Chairman, Peter Rugg. As the Parish is very scattered geographically, it was agreed that the main activities should centre on Shute Village and, thanks are owed to Mrs Amanda Graham, Head teacher of Shute Primary School, who allowed the school facilities to be used.

The celebrations started with a ‘Bring and Share’ lunch at Whitford Village Hall on Sunday 3rd, with about 75 participants taking part, followed by a Loyal Toast and the National Anthem sung. ( Left click once on photos to enlarge, twice to enlarge them even more) 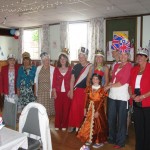 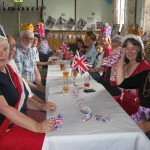 This was followed at 4.00 p.m .by an excellent Jubilee Service at Shute Church attended by just 35 parishioners, conducted by Revd. Alastair McCollum.

Monday, with the weather ideal for outdoor activities, the Primary School became the centre for the final day of celebrations. Games for the young and old such as egg and spoon races: 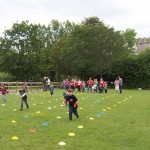 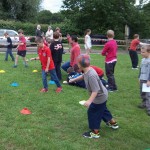 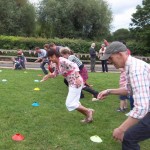 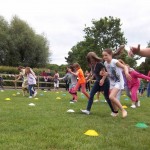 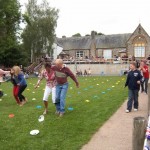 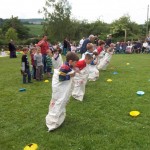 Maypole dancing – thanks to pupils of the school: 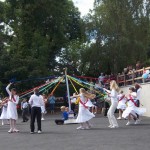 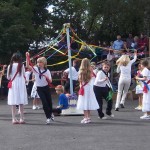 followed by tea and again a ‘Toast to the Queen’ was the order of the day. Going into the evening we were entertained by a really excellent local 3-piece boy band ‘Wise Intentions’, all 3 former pupils of the School. .

A big ‘Thank You’ must go to The Parish Council and its members, The Head teacher, Staff and pupils of the Primary School, Whitford Village Hall committee, Revd. Alastair McCollum, Christopher Pole-Carew , Ella Sweetland and all others, too numerous to mention who made this such a memorable occasion.

God save The Queen !!

Rick adds: What an amazing afternoon of fun – yes in the fine weather! – at Shute School on Monday afternoon. We reckon there were well over 200 people there. We all enjoyed the children’s ( and some brave adults) games, the school may-pole dancing, the bouncy dragon, the cakes, ice-creams and drinks, Christopher’s bubbly for all adults ( very generous, thank you), live music, a well supported draw and a group photograph.  Our thanks to the head teacher Amanda Graham and her team along with the Parish council’s team of helpers and organisers. It was a fantastic community event. It would seem that a profit was made – money which will be distributed to local groups – more details soon.