Nobody will need telling that the dryness of the past year or so
was replaced by rain..a hefty 181.1mm total rainfall for April. This is
getting on for one third of the total rainfall for the previous twelve
months. Rainfall was recorded for 23 days, that is from 1000-1000 Summer
Time each day, and there were two significant totals; 31.6mm on 24th
and 30.1mm on 29th. The next wettest, 17.5mm on the 22nd had in itself
almost the total rainfall for the whole of March. Compare that with
April 2011 with a monthly rainfall total of just 12.8mm. The previous
wettest April I recorded here was in 2000, with about 152mm.

The record breaking warmth that graced the last week of March
was replaced at the very end of the month with a colder regime, and by
the night of the 2nd April, there was a minimum temperature of -3.3C.
Northerly airstreams are typical of our weather in April, bringing
chilly showery days and cold clear nights. I recorded some frost damage
to budding shrubs particularly after the month’s lowest reading of -3.7C
on 16th. The day with the warmest reading was Easter Sunday (8th) at
16.3C. March had seen twelve warmer highs.  The average temperature for
April was 7.4C, quite one degree lower than the reading for March, and
getting on for 4 1/2 degrees colder than April 2011. My temperature
readings are not complete enough to give a true comparison, but the
month came out colder than any for the last ten years at least. 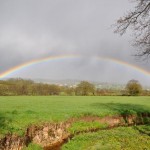