Residents of the Umborne Valley, near Axminster, will this weekend be gathering to mark the culmination of remarkable community commitment and dedication, as they officially open their new village hall. Mrs Dorothy Blackmore and Mrs Lillian Bird, two long-term residents of the valley will cut the ribbon to open the new hall. Mrs Blackmore has connections to members of the Women’s Institute who originally put the hall here in 1948. A celebratory afternoon starting with cream teas and an official Opening Ceremony, will continue long into the evening with a community ‘Bring and Share’ Supper.

Taking over a decade to reach fruition, the new hall project represents the true force of a community that put its mind to achieving something good for its future. The community may be small in number but the journey to get there has been a tale of big ambition, perseverance and stoic patience.

It began about fifteen years ago, when the then Chairman, Vincent Bowles, suggested the idea of replacing the old hall, a rather damp and unstable Second World War Quonset/Nissen hut, with something a bit more suitable, and versatile, to be at the heart of this geographically spread-out, rural community. Several small grants were secured from the Garfield Weston Foundation, Lloyds TSB Foundation and the Amory Charitable Trust. Money was also raised fastidiously and imaginatively through regular theme nights, harvest suppers, summer BBQs and lots of raffles and donated prizes, to a point where, in September 2009, £41,000 was in the bank.

‘Several significant legacies have been generously gifted over this time, whilst many other people gave their time and money over the years,’ said Rob Summers, Chairman of the Trustees. ‘Whether serving as a Trustee, organising and running events, cooking hundreds of meals, baking thousands of cakes, planning quizzes, running raffles, marshalling at running races or washing and tidying up events; everyone has done their bit for the new hall. It truly has been built on community effort.’

A major boost came in September 2009 when an application to the Community Council of Devon granted the project £27,000, making the prospect of building work suddenly within reach. This success was followed quickly by further funding awards, including over £12,000 from the East Devon AONB Sustainable Development Fund and, more recently, £8,000 from the Awards for All fund.

At the beginning of 2010, the Trustees were tantalisingly close to having enough funds to start the work. However, being a little short, they called upon the community to give one last push. The “Umborne Bond” scheme – repayable loans from the community that will benefit from an annual prize fund – was launched and has raised over £13,000! People again came together and donated what they could, even in this credit-crunched time, and enough was secured to begin the build. 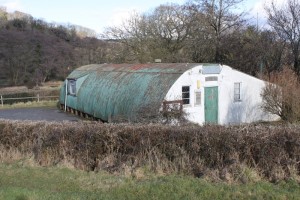 On 26th February 2010 the last event was held in the old hall and days later the diggers moved in.

Through a sentimental attachment to the old hall, as well as recognition of its historical worth, the Trustees were delighted when a team of enthusiasts from South West Airfields Heritage Trust, based in Dunkeswell came forward and offered to dismantle it. It is hoped they will be able to put it back up at the Aerodrome, where it came from in 1948, to serve as a museum for East Devon’s wartime heritage. 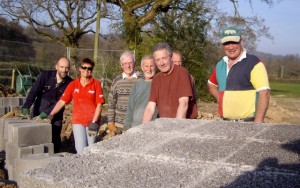 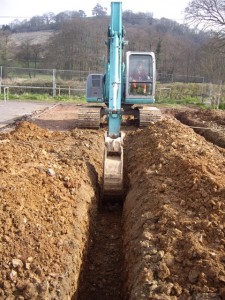 Work began clearing the site, with the wonderful donation of a digger and driver from a local businessman. Work soon picked up a pace and parties of local residents were organised to help move blocks, level concrete and provide drinks, cakes and ice creams for the builders from Whimple-based Harris Timber Products. Residents stopped off on the way home from work or for an hour or two at weekends, to paint the hall inside and out. Mrs Lillian Bird kindly donated a piece of land to build a bigger car park. The result of this seven months of whirlwind activity and industry is that, after 12 years wait, the community of Umborne at last has a modern facility that will bring together their community for a long time to come.

”After all these years of sitting in a cold hut planning and dreaming of what might be, we eventually got there!” said Rob Summers. “Thank you to everyone who has contributed, in whatever way they could, over the years. I personally have many good memories of times in the old hall, and am looking forward to making many, many more in our new hall…they certainly will be warmer and drier! ”

”We are now ready to open our wonderful new hall, a beautiful wooden building nestling in the Umborne valley in the heart of East Devon’s outstanding countryside. Well nearly – there’s always one or two bits left to do – but after so many years we would be at a loss if it was all finished!” exclaimed Sue Gush, Trustee. ‘It really is the centrepiece of our community that we – and all those that put so much effort into this over the years – were hoping for.”

For further information on the hall and the Umborne community visit: www.umborne.org

Notes to Editors and photographers

The celebrations will begin at 4pm on Saturday 16th October, with the official Opening Ceremony will take place at 4.30pm presided over by Mrs Dorothy Blackmore and Mrs Lillian Bird. Complimentary cream teas will be served until 6pm.