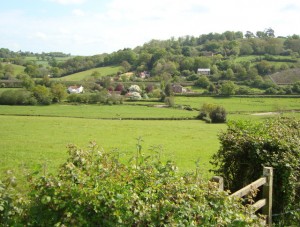 The Umborne Valley nestles in the heart of East Devon, in an area of outstanding natural beauty.

For those lucky enough to live here, the surrounding countryside offers ancient woodland, rivers and brooks, fields criss-crossed with hedgerows and wildlife in abundance. Needless to say, with such delights on show, it’s just as attractive to visitors.

This website is for both groups. You’ll find information on Umborne events, groups, services and attractions (such as the best local walks and pubs), as well as interviews with local people and much more. We hope you find the site useful.

Shute parish lies at the southern extremity of the Blackdown Hills. The rolling topography is formed by Triassic Keuper Marl clays, capped by the more freely-draining greensand. At the junction of these strata numerous springs emerge which can cause local land-slippage. The local building stone is chert (“flint”) which is found as layers within the clay. Both this very hard stone and the clay (used to make cob for building) were extracted in the past, leaving small quarry pits in many fields. The valleys of the Umborne and the Axe have broad floodplains of silty alluvium. 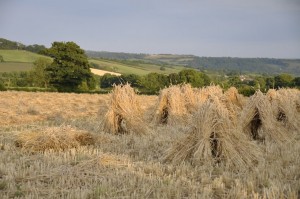 The clay and alluvial soils are ideal for dairy pasture, while the grassland on the greensand dries much earlier in the summer. Much silage and hay is made, but there is relatively little arable land, and most of this is harvested for on-farm use as animal feed. These small fields are surrounded by a network of substantial ancient hedges, rich in woody species. The greensand cap of Shute Hill would once have been common-grazed heathland but has long been used for commercial forestry. 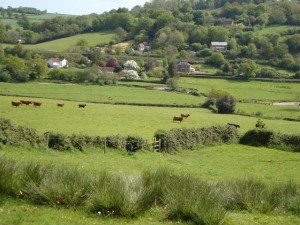 The parish is rich in wildlife. Dormice are common, probably reaching as high a density as anywhere in Britain, and there are small numbers of brown hares. It is of international importance for bats due to the proximity of the winter roost at Beer Quarry Caves and the rich diversity of feeding habitats. Species that use the parish include greater and lesser horseshoe bats and Bechstein’s bat. The River Axe itself is an SSSI (Site of Special Scientific Interest) and an SAC (Special Area for Conservation – a European designation), and together with the Umborne, has populations of otters, bullhead and brook lamprey. Woodend Park is well known for its ancient oaks (including King John’s Oak), and is important for insects, fungi and lichens. In early spring wild daffodils are abundant in some hedgerows and fields, with bluebells and ramsons a little later, and some fields, particularly on steeper slopes are botanically very species-rich.