The day the Germans crashed on Umborne

White cloud obscured the German bomber from the ground, so its vulnerability to attack from a fighter of the resurgent RAF was from above.

Realising that his aircraft would be silhouetted against the moonlit cloud beneath, the pilot, Oberleutnant Kurt Gumbart, at 29 the oldest of the crew of four, instructed his wireless/telegraph operator, Willi Zastrau, to keep a sharp look-out overhead.

Vigilantly, he had kept changing his aircraft’s course and varying its height between a maximum of 6,500ft and a minimum of 3,500ft as it flew over East Devon, but because it was now nearing its target it was flying a straight course.

Its mission was to rain destruction on Exeter, a city reckoned to be the second most impressive architectural site in the south after Bath. Exeter had no strategic significance. It had been selected in revenge for the Allied bombing of Lubeck, this was to be the first of many raids on the city, climaxing the following month.

Kurt Gumbart’s bomber had a payload of two 1,400kg bombs, all it could carry on a five-hour round trip without an intermediate landing in France.

Stalking the same skies that dark night in 1942 were Pilot Flying Officer Thorp and his wireless operator, Sergeant King, in their Beaufighter, of RAF 604 squadron, Middle Wallop. They were on the look-out, too – for enemy bombers like Gumbart’s.

What they saw from over the sea interested them. As the Germans had predicted, the target they spotted lay below them. They caught sight of the enemy aircraft again soon afterwards, and then lost it among the cloud for 10 minutes. Now crucially it was above them. They increased speed and climbed but had to throttle back because their target was flying more slowly, now on a straight and level course to the west.

With the moon in F/O Thorp’s eyes, they saw the silhouette of the enemy plane again. They closed in from below and recognised it as a Dornier 217. Having identified it, they drew back and opened fire from between 50 and 100 yards and from a slightly lower level. From their cannon, 51 rounds were shot at the bomber.

Almost instantaneously, flames poured from the Dornier’s port engine. Thorp banked his fighter to the right and then swung back to watch the bomber, now enveloped by flame along the whole length of its fuselage, dive vertically to its doom. It passed through cloud beneath its attacker and lit up the sky with a brilliant flash as it exploded.

Two shots had hit the tail of the plane and others pierced the fuselage, one severely injuring engineer Lothar Barthel’s hand. Fatefully, most of the shots had holed the fuel tank.

Later, pilot Gumbart was to inform intelligence officers that the engine was still running but the tank was blazing like a torch. He gave the order to bale out and soon afterwards baled out himself.

It was 11.25pm on 23 April. A patrolling aircraft reported the crash happening 15 miles east of Exeter. The mighty plane had actually come down on a tiny, triangular piece of land immediately to the east of the railway embankment carrying the line from Seaton Junction to Exeter and almost opposite a Nissen hut, which was the site of a searchlight.

Its unlikely graveyard was Eight Shillings field near the hamlet of Umborne, part of the parish of Shute. It was burned out. Almost nothing survived except one of its bombs, which lay unexploded in a shallow crater among small pieces of debris. The other bomb fell on a nearby hillside.

Willi Zastrau, aged 26, and observer Rudolf Zimmerhackel and Barthel, both 25, baled out in quick succession some time before Kurt Gumbart. They landed in Northleigh, one at Chilcombe Farm, a second in a tree on the edge of Bucknole Farm and a third at Combe Farm.

At Chilcombe, Zastrau came to ground among cows, which gathered around him in the dark. He was frightened. His cries in German could be heard across the valley. Bill Baily, a special constable, had already been alerted to the drama. A plane with engine trouble had been heard overhead and then a red glow had been seen in the distance as it crashed.

‘You’ve got to come with me,’ Baily had said to thatcher Gordon Snell, a member of the Home Guard, and to Jack Batten, a farmer. In his lorry, they went to investigate. They rescued the frantic German from the inquisitive cows and drove off towards the village police house.

Barthel, the injured engineer, and Zimmerhackel were close to each other as they came down to earth, close enough for the pained Barthel to be heard calling out: ‘Rudolf, Rudolf’. Zimmerhackel had first to extricate himself from the tree. He knocked on the door at Combe Farm, where Bill Matthews was looking out of the window. Farmer Matthews saw Zimmerhackel bury his revolver in a culvert. The German was soon to be picked up by Bill Baily’s lorry.

At much the same time, Mrs Biddick was on her way home in Northleigh after a visit to her father nearby. As she turned towards her front door, she had the fright of her life. Sheltering in her porch was the injured airman. He had not wanted to alarm her, but of course he did.

The war had come a little too close for Mrs Biddick’s comfort. But all Barthel wanted was her help. She lived only two or three doors from the policeman’s house, where the three German air crew were soon to be reunited. PC Ernest Pester was out, already called to the crashed plane. But, in time-honoured English custom, his wife served tea to her unexpected guests.

Gumbart was later to describe his own landing: ‘Suddenly I saw my parachute above me, but I saw nothing more of the aircraft. Then I landed, jarred my spine a bit and sprained my thumbs. There was a farmhouse some 50 metres away. I went towards it. First I had to crawl through a hedge, after leaving my parachute lying on the ground.

‘The rest of my crew had long since disappeared. They had baled out perhaps half a minute before me. I went up to the house, shouted, but got no answer.’

That house was Higher Watchcombe Farm. Inside asleep were an evacuee from London, Denis Swann, and a Land Army girl from Wales, May Summers.

The airman wandered down the lane and knocked on the door of Lower Watchcombe Farm. The door was answered by Barbara Gear, to whom Gumbart spoke in English, though it was obvious from his uniform and his accent that he was German. Frightened, she called out to her uncle, Charlie Gear, a prisoner of the Germans during the First World War. He wanted his rifle to shoot their unwelcome visitor.

Gumbart lay down his pistol to demonstrate he was surrendering as Barbara ran out of the house through a back door and down the field to Little Parkhayne, where Jack Train lived. Mr Train was the first lieutenant in the local Home Guard. He had seen the plane in flames in the valley below and came straightaway.

He called Johnny Clarke from Halsehayne, another member of the Home Guard, and together they arrested Gumbart, who is said to have told his captors that he could speak English because he had been to college in Exeter.

Gumbart was then taken to Higher Watchcombe to await transport to Honiton. By now, evacuee Denis Swann was awake and sitting by the fireside in the kitchen. He watched as the group of men came into the room, the German in his flying leathers. The pilot was told to sit at the long table, where he was given a supper of bread and cheese and a glass of cider.

Later, as he was marched out to a waiting vehicle, he showed his appreciation for the way he had been treated by taking off his coat and, with his flying gloves, giving it to May Summers.

Though she could hardly stand in the coat because of its weight, she was to treasure her unlikely gifts for the rest of her time at Higher Watchcombe.

Gumart, Zimmerhackel, Zastrau and Barthel were all taken to Honiton police station. There, Dr Hoffman, whose own family background was German, was called to examine Barthel’s wound. He found the German’s hand hanging from his arm by a sinew. All he could do was cut it off and dress the wound. He is said to have thrown the severed hand on to the fire before sending Barthel to the Royal Devon and Exeter Hospital.

By daybreak, work to clear the wreckage of their plane from Eight Shillings field was beginning. Nothing of any importance to intelligence officers was to be salvaged.

A bomb disposal squad, led by Squadron Leader Hubert Dinwoodie, was on its way and soon the site would be returned to the spring’s fast-growing grass and wild flowers, occasionally giving up fragments of buried metal to local souvenir hunters.

Many years later, papers in the National Archives marked ‘Most Secret’ revealed that Gumbart and Zastrau had been recorded in extraordinary exchanges with other German airmen, one a fighter pilot captured seven weeks earlier and the other a bomber pilot detained a week after the Shute crash. These recordings had been made at an interrogation unit in London where all Luftwaffe personnel were questioned before being sent to prisoner-of-war camps.

Zastrau, who seemed more concerned about how in his absence his wife would obtain his precious Dutch purchases of fine things to eat and drink including nine bottles of liqueur, 12lbs of chocolate and a range of hard-to-get groceries, described the Dornier’s last moments.

‘We were flying straight because we were just approaching the target and had to stay on our course.’

Zastrau spoke of another German plane that was subsequently shot down and reported what its wireless operator had said. ‘He saw the enemy aircraft about two kilometres in front of him against a cloud. It flew lower and then suddenly zoomed, and he saw it just above him. Then he noticed that it was changing course. At that moment he (the British fighter) fired and was about 20 metres from the aircraft.

‘I tell you I could see the flames from the exhaust. I recognised it at once. ‘’That’s a Beaufighter,’’ I said.

‘I could see nothing but flames in front and then I thought we must have got a hit in the port engine. I looked and it was going s-s-s-h. It was burning already. It all happened in a second or two; it was all so quick.’

The next morning, as the unexploded bomb was being defused at Umborne, farmer Edgar Hurford went to attend to his sheep. There, among them, he found what had landed with such a thud in the previous night’s darkness. An airman’s boot.

One of the Germans had left without a hand, another without a boot.

Here are a few pictures of the actual crash site. 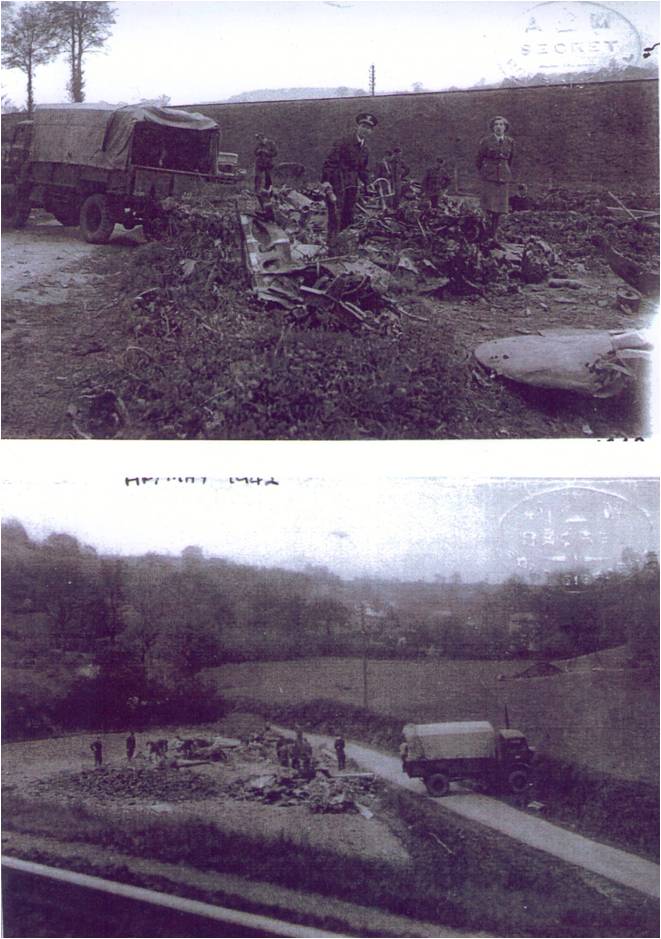 Eight shillings field (the crash site) as it is today. 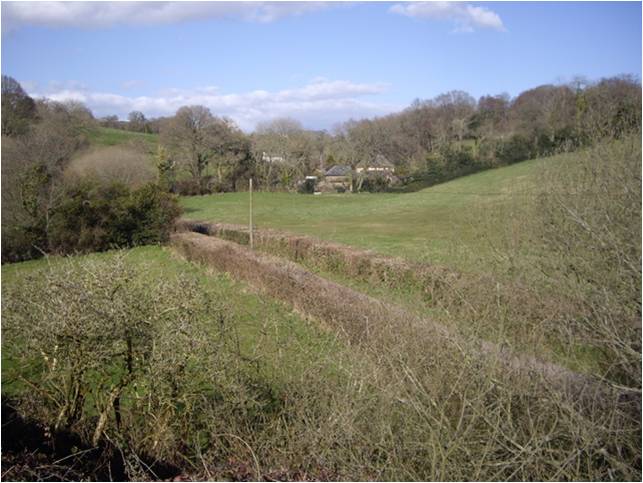 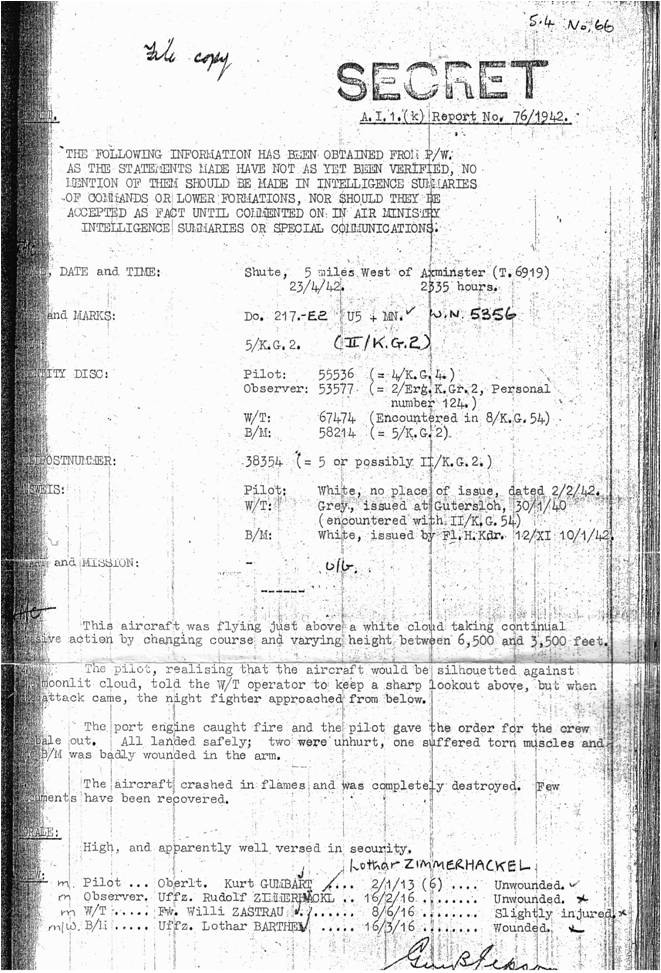